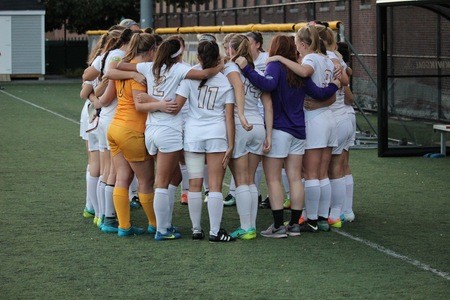 The Emerson College Lions Women’s Soccer College ID Clinic is inviting all female soccer players in grade 9 up to grade 12 who desire to play at the college level. This high-level and fast-paced soccer program is open to both field players and goalkeepers. It is going to run from 9:15 AM until 2:00 PM on the 18th of May. Moreover, this elite soccer identification camp is going to take place at the state of the art Siverlakes Sports Complex which is in Norco, California. The camp includes 9v9 and 11v11 matches that will allow the players to showcase their outstanding soccer skills. In addition, the camp registration fee is $150 per player. It will be under the supervision of the Lions women’s soccer coaching staff. Furthermore, the camp is only offering 48 available spots so registration is on a first come first serve basis.

Emerson College, originally Emerson College of Oratory is a private, coeducational college in Boston, Massachusetts. It is a proud member of the ProArts Consortium and the New England Association of Schools and Colleges. Its name is in honor of Charles Wesley Emerson, a prominent author who founded the institution in 1880. The college’s present president is M. Lee Pelton. Currently, Emerson College is serving nearly 3,800 undergraduate students. 40 percent of this undergraduate student population are male students and 60 percent are female students. This undergraduate student population is also through a selective enrollment acceptance rate of 48 percent. Correspondingly, Emerson College’s student to faculty ratio is 13:1. The academic institution is also serving around 800 postgraduate students. Emerson College is also among the region’s best academic institutions. As a matter of fact, it is 7th in the Regional Universities North category of the 2018 US News and World Reports Best Colleges rankings. The college is also 44th in the Best Value Schools rankings. Furthermore, in the sporting world, Emerson College fields 14 intercollegiate men’s and women’s teams. These teams are competing in the  Eastern College Athletic Conference (ECAC), and the New England Women’s and Men’s Athletic Conference (NEWMAC). Both conferences are part of the National Collegiate Athletic Association (NCAA) Division III. The college athletes’ nickname is the Lions and their identity color is royal purple.

Leading the Emerson College Lions women’s soccer team is Head Coach David Suvak, a native of Winchester, Massachusetts. Coach David Suvak is now in his fifth year at the helm of the Lions women’s soccer program. He is a bachelor’s degree in fine and studio arts graduate from Boston College. Coach David Suvak is also a bachelor’s degree in architecture graduate from Boston Architectural College. Additionally, Coach Suvak is holding a United States Soccer Federation (USSF) “B” coaching license. He is also a National Soccer Coaches Association of America (NSCAA) Premier Diploma holder. Ultimately, Coach David Suvak is an inductee into the 2006 Winchester Sports Foundation Hall of Fame. Then, the Emerson College Lions women’s soccer assistant coaches are Kate Ryder and Loy Urbina. And finally, Colin Connolly is the team’s goalkeeper trainer. He is at the same time the goalkeeper trainer for the college’s men’s soccer team. Coach Colin Connolly, a native of Gloucester, Massachusetts is now in his fifth season with the coaching staff. He is a bachelor’s degree in International Business and Finance graduate from Temple University.

Service Type
ID Camp for Soccer
Provider Name
Emerson College,
Area
Boston, MA
Description
The Emerson College Lions Women's Soccer College ID Clinic will accommodate both field players and goalkeepers. It is especially for those in high school who are aspiring to play soccer at the college level. This soccer identification camp is an initiative of the Emerson College Lions women's soccer coaching staff. Registration fee is $150 per player.