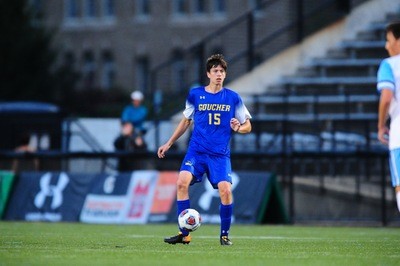 The Goucher College Gophers Men’s Soccer Summer Skills Camp is designed to provide a fun and competitive training environment. It emphasizes development in both the player’s technical skills and tactical understanding. The training program also includes small-sided and full-sided matches that allow the players to display their outstanding skills. Furthermore, this soccer camp is set to run from the 14th of July until the 16th of July. It is inviting all boys in grade 9 up to grade 12. The program is going to accommodate both residential and commuter campers. Moreover, the registration fee for residential campers is $599 while it is $499 for commuter campers. Players may also opt to register on a daily basis for $175 per day.

Goucher College, originally Women’s College of Baltimore City, is a private, coeducation, liberal arts college in Baltimore, Maryland. It is offering 33 majors and 5 master’s programs. Currently, the academic institution is serving around 1,500 undergraduate students and around 1,200 postgraduate students. 32 percent of this undergraduate student population are male students and 68 percent are female students. This undergraduate student population is also through a selective enrollment acceptance rate of 79 percent. Meanwhile, the college’s student to faculty ratio is 10:1. Goucher College has an accreditation from the Middle States Commission on Higher Education. It also one of the nation’s best academic institutions. As a matter of fact, Goucher College is 112th in the National Liberal Arts Colleges category of the 2018 edition of the US News and World Reports Best Colleges rankings. It is also 86th in Best Value Schools rankings and 71st in the High School Counselor Rankings. In athletics, Goucher College fields 21 intercollegiate men’s and women’s sports teams in the Landmark Conference of the National Collegiate Athletic Association (NCAA) Division III. Goucher College was competing at the Capital Athletic Conference (CAC) before its transition to the Landmark Conference. The athletics nickname is Gophers and the athletics identity colors are blue and gold.

Leading the Goucher College Gophers men’s soccer team is Head Coach Bryan Laut. He is now in his ninth year at the reins of the Gophers men’s soccer program. Coach Bryan Laut is a bachelor’s degree in management and history graduate from Assumption College. Then, he earned his master’s degree in sports management with a concentration in intercollegiate athletic administration at the California University of Pennsylvania. In the 2014 season, the Gophers coaching staff spearheaded by Coach Laut is the recipient of the Landmark’s Coaching Staff of the Year award. It was also the same season when Coach Bryan Laut led the team to their first-ever conference playoff berth. Currently, Coach Laut is also working as the assistant athletic director in charge of the Decker Sports and Recreation Center. The Gophers men’s soccer assistant coaches are Andrew Mpasiakos and Justin Holbrook. Coach Andrew Mpasiakos who hails from Monroe, New York is in his first year with the coaching staff. he is a bachelor’s degree in International Studies graduate from Virginia Wesleyan College. Coach Mpasiakos is a United States Soccer Federation (USSF) “D” coaching license holder. He is also a National Soccer Coaches Association of America (NSCAA) Advanced National Diploma holder.

Service Type
ID Camp for Soccer
Provider Name
Goucher College,
Area
Baltimore, MD
Description
Join the Goucher College Gophers Men's Soccer Summer Skills Camp. It is both a residential and commuter camp that will run from the 14th of July until the 16th of July. It is open to all high school freshmen boys to seniors. The training program is going to take place at the beautiful Goucher College campus in Baltimore, Maryland.