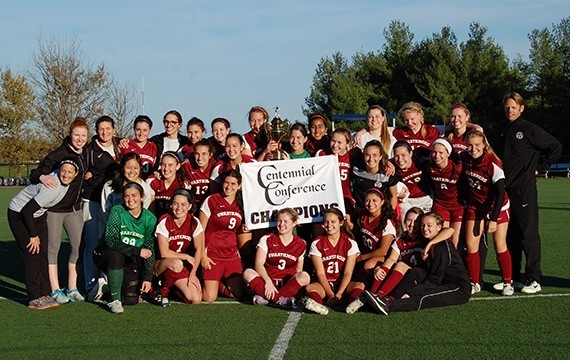 The Swarthmore College Garnets Women’s Soccer Summer ID Camp is going to take place at the state of the art Clothier Soccer Stadium which is on the Swarthmore College campus. This event is set to run from 4:00 PM until 7:00 PM on the 11th of August. This summer ID camp is inviting all female soccer players entering grade 9 to grade 12. In addition, the camp is intended for those who are aspiring to become a college soccer student-athlete. An optional info session is also set to run from 3:00 PM until 4:00 PM. Furthermore, this soccer camp is only offering 18 available camper spots so registration is on a first come first served basis. The camp registration fee is $155 per player. The participants are requested to bring their own soccer ball, flats, club jersey, and water bottle.

Swarthmore College is a private, coeducational, liberal arts college in Swarthmore, Pennsylvania. It is among the nation’s oldest coeducational colleges. Additionally, Swarthmore College is also part of the Tri-College Consortium. The other two members are Bryn Mawr College and Haverford College. Presently, Swarthmore College is serving around 1,500 undergraduate students. This undergraduate student population is through a most selective enrollment acceptance rate of 13 percent. Correspondingly, the college’s student to faculty ratio is 8:1. Swarthmore College is also a top-performing academic institution. As a matter of fact, it is 19th in the Forbes Magazine’s List of America’s Best Colleges. It is also 3rd in the National Liberal Arts Colleges category of the 2018 US News and World Reports Best Colleges rankings. In sports, the college is a member of the Centennial Conference of the National Collegiate Athletic Association (NCAA) Division III. It has 22 intercollegiate men’s and women’s sports teams. They are the Garnets and their identity colors are garnet and gray.

Todd Anckaitis is the head coach of the Swarthmore College Garnets women’s soccer team. At the same time, he is the college’s Co-Physical Education Coordinator. Coach Todd Anckaitis is now entering his 13th year at the helm of the Garnets women’s soccer program. He is an alumnus of Lafayette College. Ultimately, under Coach Anckaitis’ leadership, the Garnets have won three Eastern College Athletic Conference (ECAC) championships and a Centennial Conference Championship. The team also have three NCAA Tournament appearances with Coach Anckaitis at the helm. Then, the Swarthmore College Garnets women’s soccer assistant coaches are Reba Magier and Hannah Lichtenstein. Coach Reba Magier, a Swarthmore College biology and computer science graduate is with the coaching since the 2016 season. Currently, Coach Magier is also working as a software engineer at Syapse. She is also a former collegiate soccer standout. In fact, Coach Reba Magier is the 2014 tournament Most Valuable Player. She played as goalkeeper of the Garnets’ 2014 Centennial Conference Championship team. Coach Hannah Lichtenstein who hails from Greater Philadelphia area is entering her first year with the coaching staff. She is a former Swarthmore Garnet standout. Ultimately, Coach Hannah Lichtenstein is the 2014 Centennial Conference Rookie of the Year awardee. She was also a three-time All-Centennial Conference First Team selection during her college playing years.

Service Type
ID Camp for Soccer
Provider Name
Swarthmore College,
Area
Swarthmore, PA
Description
Join the Swarthmore College Garnets Women's Soccer Summer ID Camp on the 11th of August from 4:00 PM until 7:00 PM. It is open to all girls 14 to 17 years of age who aspire to play soccer at the college level. This soccer summer identification camp is going to take place at the top-notch Clothier Soccer Stadium in Swarthmore College campus.